The Lancet: Exceptional and extraordinary artists

When he attended a school for deaf children in the 1970s Mark Smith had to use sign language in secret to communicate with his friends. At the time, he had no idea why sign language was taboo. But thanks to a pioneering project that has brought artists together with medical museums in the  UK, he discovered that an 1880 international congress in Milan decreed that sign language should be banned in schools to force deaf children to integrate.

The conference is one of the forgotten tales from history that dancer and choreographer Smith, founder of Deaf Men Dancing, has interpreted in a fusion of dance, theatre, and sign language as part of the Exceptional & Extraordinary project. The initiative invited four artists—Smith plus playwright Julie McNamara, film-maker David Hevey, and comedian Francesca Martinez— to explore the collections of eight museums in the UK to create art which challenges negative ideas of disability.

Hevey’s film Fight for Life examines how people with disabilities today are affected by biomedical decisions and austerity cuts, while Martinez’s performance Wobbly Manifesto challenges audiences to accept diversity. The works will tour the partner museums this month and also be shown to students at Leicester Medical School.

Richard Sandell runs the Exceptional & Extraordinary project with Jocelyn Dodd at the University of Leicester’s Research Centre for Museums and Galleries. He argues that “medical museums have traditionally shown disability as a deficiency that needs fixing which clashes with the contemporary view of disability pride which has grown out of the disability rights movement. They have been operating in the shadow of the freak show.” Dodd explains that their project “aims to stimulate debate—among doctors as well as the public—about medicalised perspectives of disability using humour and live art”.

Smith has found the project fascinating: “I have discovered so much about the history of deafness.” He was shocked at the number of soldiers made deaf by cannon and guns in World War 1. “I feel it is my responsibility to retell the stories for the next generation”, he says. He was intrigued to find   artifacts too, such as Queen Victoria’s silver ear trumpet in the Thackray Medical Museum, in Leeds, and cumbersome box hearing aids like the one he wore clamped to his chest as a child. The work he has created, Let Us Tell You A Story, incorporates replica hearing aids and trumpets to tell five  stories inspired by the museum collections.

Julie McNamara, who describes herself as “a mad woman made good”, has also reclaimed forgotten history for her play Hold the Hearse! “I have always begged, stolen, and borrowed stories from museums”, she says. When she met the curators of the museums involved she asked each of them two questions: what would they crawl on hands and knees to save in a fi re and what item in the hidden collections most disturbed them. The replies fed her time-slip tale that meshes stories from the Hunterian Museum, the Bethlem Museum of the Mind, and the Langdon Down Museum of Learning Disability.

In her play, McNamara takes the role of Maudlin Mary who meets Walter Riddle, played by Eden Webber, in the house of 18th-century surgeon John Hunter. Mary wants to reclaim the bones of her child which have been preserved in Hunter’s collection. The story has a personal resonance for McNamara because an older sister was born with anencephaly in 1958. At the time doctors would not let her mother see the baby, who died, describing her as “a monstrous birth”. Having herself spent years “in and out” of psychiatric hospitals, McNamara says: “I hope people, especially doctors, will come away from the play with questions about current attitudes towards mental health but I also hope they will have fun.” She adds: “I write with a bawdy humour.”

Dates and information about Hold the Hearse!

The Making of Hold the Hearse! 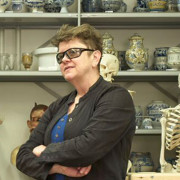 Exceptional & Extraordinary – Unruly bodies and minds in the medical museum 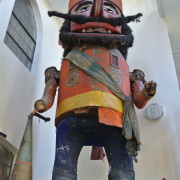