Liverpool was built on slavery. Of this there is no doubt. This is largely the reason why the only International Museum of Slavery in the world is housed in the Maritime Museum on Liverpool’s Albert Dock.

Did you know that Liverpool was one of the key slave ports in the Middle Passage? Literally millions of enslaved African people were processed, bought and sold on those docks. Did you know that there were at least 90,000 enslaved Irish women and girls taken to Liverpool from Ireland to become breeders for the New World and shipped a long way from a famine created by the British Government?

Liverpool-born Julie McNamara has lived with these uneasy facts for as long as she can remember.

She explains: “My father’s was one of many Irish Catholic families settled around the river Mersey and destined to become ship builders. Camell Laird’s ate up 35 years of his working life. He belonged to the sea and was only ever happy on water. When he dredged up an old life boat from the bed of the Mersey, the neighbours mocked. Two years he laboured with his hands, working every spare hour until he had finished a beautifully crafted fishing boat. 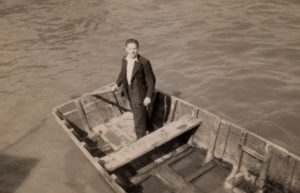 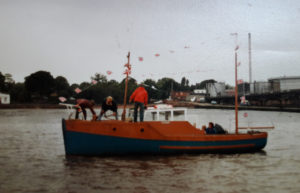 The Dajam was launched and he disappeared. He would be gone for weeks at a time, returning to scoop me up at the bottom of the jetty near the Admiral pub at Rock Ferry.  Everything I know about boats, I learned at my father’s side, how and where to fish, to manage the boat, to row or to skull with a single oar. I was the son he had always wanted and I was destined to walk on water. He taught me to drive on a disused road near Morpeth dock at the age of 15. I had to weave between the anchor chains and three bollards preventing us falling into the river, ramp it up to fourth gear and screech to an emergency stop before hitting the brick wall ahead. Then do the whole thing, over and over in reverse gear. I am an expert driver.

But when my father died his boat went to a male relative. I was furious. The Dajam should have been mine. Some years later I went in search of my father’s boat knowing it was somewhere out there on the Mersey. Every name change of a ship or boat has to be registered with the maritime office on Albert dock, so I headed for their archives. Three hours later, defeated and utterly bored with the pages and pages of entries, I went for a breather in the International Museum of Slavery on the floor beneath. What I witnessed there took my breath away and sent me on an entirely new course of action. I gave up on the Dajam in search of the Zong.” 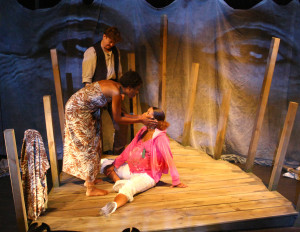 The character Nzingah was the voice of our conscience, drawn from the story of an enslaved African woman who had witnessed the cold-blooded murder of 132 people thrown overboard for a fraudulent insurance claim based on ‘losses at sea’ from the Zong – known as Liverpool’s Ship of Shame. Julie Mc had found the details of the ship’s story in the International Museum of Slavery. 133 people were thrown overboard to lighten the load and save food supplies when the ship was floundering, 60 days off course. It is recorded that one person survived, having clawed their way back on board. They hid among the food supplies until the Zong reached dry land – and lived to tell the tale. Julie Mc used poetic license to reimagine the story and decided that person must surely have been a woman.

Heggarty’s story was based on the life and times of Katherine Heggarty, a female pirate who took the passage from Ireland to the new world, to begin life afresh in New Zealand, only to find she was at risk of becoming the ship’s whore when her twin brother died on board. Katherine stole her brother’s identity and concealed herself amongst the men until she reached the shore. Julie Mc sourced Heggarty’s story in Te Papa and Pettone Settlers Museums in New Zealand.

Shelley was 15, pregnant and tied to a Liverpool gang running drugs out of Canning dock. When things turned nasty on the docks, she was desperate to get out of the gang and save the life of her unborn child. Shelley’s struggle is based on that of a local young woman’s testimony, who worked hard to steer free of the gang culture that nearly consumed her and put her unborn child at risk.

The story at the heart of the production was an exploration of slavery in its’ many forms; across three continents and three time zones, the three protagonists arrive like ghosts from the past to taunt and test the besieged Shelley – like a modern-day Scrooge.

“Through beautiful acting and direction… it makes connections between the many hideous forms of slavery which blight the hopes and dreams of society, past and present.” Julie Bindel, The Guardian

An extraordinary team of creatives brought the work to life directed at R and D stage by Karena Johnson and then when we went to full production, we sailed with Paulette Randall at the helm. We worked with a unique set designed by Chris de Wilde with the brilliant Margo Cargill in mind, a blind actor playing a lead role in the play. Strong narratives with a bold visual aesthetic are key features of Vital Xposure’s work with the visual elements often created by Caglar Kimyoncu, Artistic Director at filmpro, with lighting design by Crin Claxton. 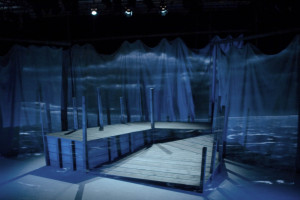 Early in 2009 our Director Karena Johnson was offered the Artistic Directorship at The Broadway in Barking, at this stage we were fortunate enough to attract Paulette Randall who took over at the helm and the show was back on the road with a vengeance.The production returned to Treasure House Theatre and Bird Theatre in Liverpool, receiving four star reviews on its’ next outing in 2009-10.

We were then offered support to further develop the work at Cochrane theatre in Holborn and it went on to tour seven national venues throughout the UK and Ireland.

The production had a national tour that had its’ finale at the Baby Grand, based at the Grand Opera House in Belfast. That outing attracted the interest of Arts Review programme on Ulster Television, attracting over 70,000,000 viewers.

The cast had changed by then but the access aesthetic remained, with integrated sign language throughout created by Hetty May Bailey, interpreter and BSL consultant and Audio Description provided by Pauline Brandt.

Crossings was to become one of the hottest theatre tickets at the Decibel showcase in Manchester and landed Julie McNamara the South Bank Show Diversity Award [watch the video on the left].

The production met with enormous success for this very small company, but the landscape of touring theatre was changing rapidly and it was difficult to create any follow up. Theatre venues were becoming more and more cautious about work they hadn’t seeded themselves, inside the protected walls of their own spaces. 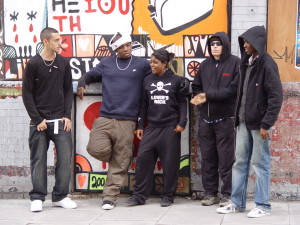 Plans to take Crossings to Youth clubs, Arts centres, college and FE audiences hit the wall. But the stories at the heart of the work remain just as relevant today as they were in 2010 when the show was put to bed.

Thanks go to the original cast: Margo Cargill, Hetty May Bailey, Nadine Wild Palmer, Julie McNamara and to the second wave cast including our much treasured Naomi Cortes and Sophie Benjamin.

Steak and Chelsea Out to Lunch
Scroll to top