In light of the government’s advice on Monday 16th March 2020, we regret to inform you that the spring tour of Medicine’s Monstrous Daughters is not happening.

We are all sad about this news, however  it is a prudent approach considering the circumstances. The well-being of everyone involved in the production and audiences is of paramount importance. We hope people stay well and safe, and that the sector – both organisations and independent creatives – can stay well and plough their creative hearts and skills into imagining a brighter future on the other side of these frightening and challenging times.

If you have already booked a ticket, please check directly with the venue’s website for updates and advice.

We are sending everyone our thoughts of solidarity and a message of hope and support from our Artistic Director.

Keep well, keep safe, keep in touch with us! 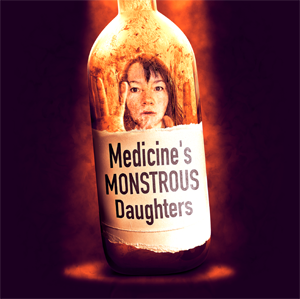 A review on the work in development

Here are two powerful stories telling tales of brutal betrayal and dereliction of duty of care. I left the studio late today, feeling galvanised into action, determined to make changes, somehow, some way.

Only human connection, tenderness, compassion, only Love will win the day.

When you’re the kind of person they don’t want to believe: mental health and racism

It is screamingly clear that people of colour are more likely to experience mental illness through living in a racist world, which is then doubly compounded by the lack of acknowledgement of their subjugation when seeking support

Two powerful plays, inspired by real life events, are woven together across time to expose unpalatable truths about the treatment of people deemed ‘different’ or ‘damaged’ and asks how much of our humanity do we lose in search of the cure?

Julie McNamara’s Monstrous Daughter is a funny and haunting story, told from the perspective of Mad Mary, on the run from ‘the specimen collectors’. Hidden amongst the human specimens in an old museum, Mad Mary searches for her lost baby, and encounters Walter Riddle, sluice boy and guardian of the surgeons’ special collections in the bowels of the medical museum. They bring the grisly reality of body snatching to light and invite audiences to question our attitudes towards difference.

“…it is a brilliant provocative, political work. Recommend everyone see it.”

Medicine, the extraordinary debut play by Omikemi, looks at contemporary experiences of the mental health system by women of African heritage and unravels a hidden tale of unethical medical experimentation and exploitation.

The story moves between the lives of Elaine and Kem, struggling against a system that seems only to want to make them compliant and invisible and Elsie Lacks, institutionalised at the age of 10 and experimented on without her family’s consent. Elsie’s mother, Henrietta Lacks, was the source of the eternal HeLa cell line, one of the most important cell lines ever used in medical research. Those cells were taken without her permission.

Together, these plays tell some of the untold stories behind medicine’s ‘magical’ gains.

Written by Julie McNamara and Omikemi.

Since graduating as an actor from LAMDA with their Spotlight Award for most promising actress, Penelope has pursued a lifelong and varied career across all genres.

Her stage work includes two seasons at the Royal Shakespeare Company in Stratford-upon-Avon and The Barbican, appearances in London’s West End including “The Mousetrap” and “Werewolves” and seasons with many repertory companies including Birmingham Rep, Stoke-on-Trent, Harrogate and The Globe Theatre Company in Warsaw in Poland.

As a television actor she has worked for most of the major TV companies and her appearances for BBC and ITV include “Red Dwarf”, “Wire In The Blood”, “Daziel and Pascoe” , “Doctors”, “Wild Things” and 2 seasons of the Carla Lane series “LUV”.

She enjoys audio work immensely and as well as voice-overs for commercials she has worked extensively in the field of animation. Her credits include the TV series “Watership Down”, “Save-Ums” and “Franny’s Feet”, and she has also recorded many plays for radio including the Charles Dickens serial “Our Mutual Friend” for BBC Radio 4.

Visual impairment has afflicted 5 members of her family and as a result Penelope has established a long association with the RNIB recording countless books for them and over 200 audiobooks for  commercial companies.

Her main passion however is live theatre and trying to ensure that it continues to thrive and be both accessible and affordable. Since the demise of the repertory system therefore, she has committed to working for and supporting vibrant companies such as Vital Xposure with whom she has a long association. In recent years she has collaborated and performed in their productions of The Knitting Circle, The Disappearance of Dorothy Lawrence, the award winning films Blue Pen and Voices From The Knitting Circle. She is delighted therefore to return once again to direct Medicine’s Monstrous Daughters.

Julie McNamara is a nationally and internationally renowned artist and activist in Disability Arts and Artistic Director of Vital Xposure (2011 – 2020), one of the UK’s leading disability-led theatre companies. Driven by social justice, Julie has a life-long preoccupation with disavowed voices on the political periphery. She is an award-winning playwright and screenwriter, recently recipient of the Best Documentary Over 30 Minutes and Best of the Festival Award at Picture This… Film Festival, Calgary, Canada, 2018; Unlimited Award 2014; Southbank Show Diversity Award ITV 2010; ITV & DaDa Writers 2009; Peabody Award for documentary 2000. She has a substantial theatre production history both in the UK and on the international stage, and has published widely in poetry anthologies and non-fiction discourses on Disability and Mental Health. In January 2019, Julie has been awarded a Miegunyah Distinguished Visiting Fellow from the University of Melbourne, Victoria. Julie McNamara also directed The Butch Monologues which in Australia between January – March 2019, following its sell out tours across the UK in 2015 and 2017.

Omikemi is a writer and poet based in London. Her work has been published in numerous publications including, Soundings: Journal of Politics and Culture, Ambit, Rialto and Bloodaxe’s

Ten: Poets of the New Generation. Her debut pamphlet poetry collection, If I talked everything my eyes saw, was shortlisted for the 2017 Michael Marks Award. Omkemi’s work is driven by lived experience and an interest in memory practices. Her first exploration of this theme was Nine Night, an immersive ritual theatre piece exploring ancestry which featured as part of The Yard Theatre’s NOW 15 festival. She has also collaborated with performance maker Rajni Shah to create Song for the 2016 What Remains performance art festival. Her work continues to explore memory, particularly somatic memories, how these are transferred across generations and the appearance of these processes in the field of mental health.

“… Moments of magical realisim… mesmerising musicality, offer us the possibility of divine redemption, which is of course poetry”, Pascale Petit

For further information about the production, please contact us.