The Story of the Knitting Circle 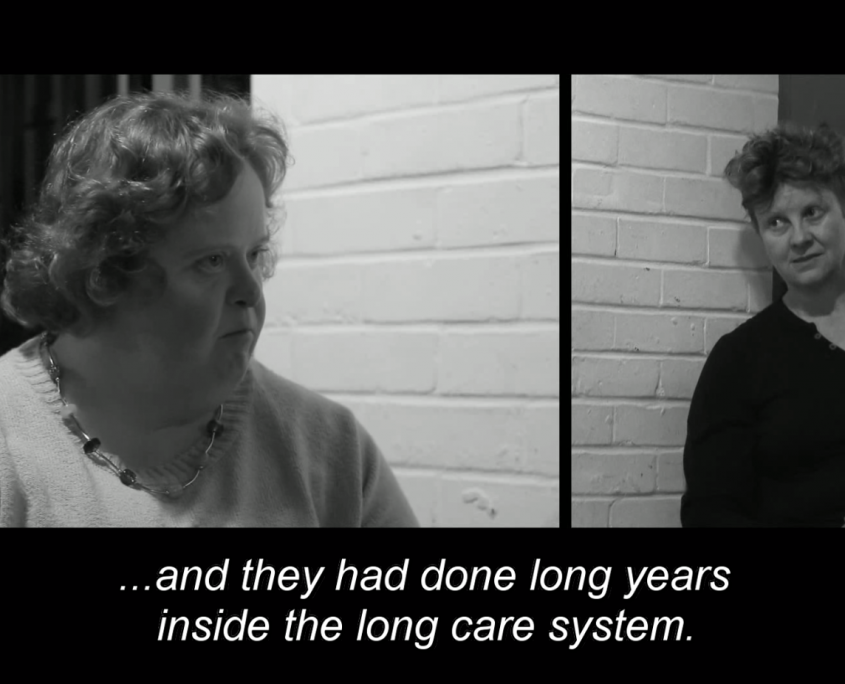 Screenshot from the documentary ‘Voices from the Knitting Circle‘ (2018)

Photo from the theatre show ‘The Knitting Cirlce‘ (2011)

“I once lived and worked in a 2,000 bed, long stay hospital, set in beautifully designed grounds with a fabulous sweeping driveway that would put Peyton Place to shame. Built in the 1920s, it was originally designed as a Colony to house people with epilepsy and people cast out of society for the most spurious reasons. It then became the last port of call for people with learning disabilities. Harperbury hospital and the people who lived and worked there, will remain with me until my dying day.

Thousands of people were forced to survive in these ‘bins’. I know that sounds inflammatory. The long care system was originally created by Quakers as a sanctuary, a place of safety. What I witnessed was a system that was used and abused to cast off social rejects in an era of moral panics. People like you and me were too easily diagnosed, labelled and cast aside.

In the mid-1980s I found myself living and working in one of the larger institutions of the ‘Hertfordshire cluster’ where there were six huge self-sufficient hospitals, each built like villages to contain up to 2,000 patients.  I was training as a Dramatherapist and ran a women’s group in the Social Education and Assessment Centre, SEAC Unit, also known as The University on site. The Knitting Circle is written from the stories of some of the members of that group and from the testimonies gifted to me by people who survived the asylums.”

With these words Julie McNamara summarises the experience that motivated her to create The Knitting Circle.

The production gave us a chilling glimpse into a lost world and painted an extraordinary picture of the lives of women who survived Britain’s long care system. The involvement of those who gifted their stories for the production took many forms and continued throughout and long after the close of the tour at Bristol’s Brewery theatre in 2013. The documentary of the making of this work and the voices of some of the extraordinary people who entrusted us with their life stories will be available from Autumn 2017.

We are the Bees

In 2013, three senior contributors to the production, survivors of the asylum system, made a guest appearance at the closing performance of The Knitting Circle in Bristol. They took to the stage to thank their audience and take ownership of the show: “Thank you all for coming to see our play.”  Their support for the production was extraordinary. They attracted more than two rows of fellow survivors, a gloriously appreciative crowd who joined us in a filled auditorium on the final night of the tour. The following clips give a brief insight behind the scenes with Rosie, Mary and Carole.

Hilary Porter is the artist behind the wonderful hand-knitted exhibition that toured alongside the production. Hilary is a published poet, creative writing tutor and workshop facilitator. She also happens to be a mental health system survivor. Julie talked to Hilary about the meaning of her work:

“What do these brick patterns represent?” I asked. “That’s the wall of Homerton Hospital. I’ve seen that too many times.” “And the other walls?” “That’s Hackney Hospital. That other one’s the wall near the clinic.” “What about the egg?” I asked carefully. “Well, it’s an egg isn’t it. Nothing deep there. That’s my favourite breakfast”. Of course the fried egg was the first artwork to sell. Hilary was delighted at the first hot sale from her exhibition. Anyone who would like to buy any of the articles displayed please get in touch and we will connect you with Knitwitz. 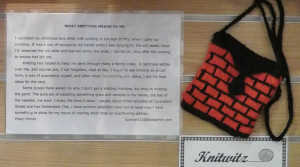 Hilary’s brick pattern. Click on the image to read the text. 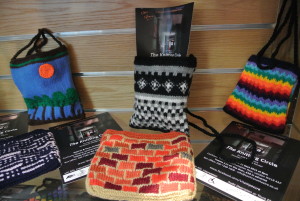 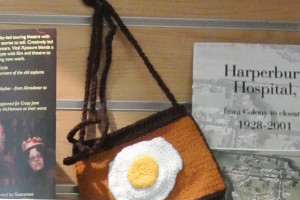 The Knitting Circle was dedicated to Betty, Miriam, Anne, Joyce, Dorothy, Linda, Rosemary, Rachel, Priti, Nan, Celia, Iris Noden, Sister Mary Francis Maronda, and to the thousands of women who were forced to live in the Asylums. Their lives were not made easy, but they taught me much about the irrepressible human spirit and the art of laughter amongst the tears.

“It was the mischief that got us through. That’s how we survived.” Mary, aged 76

Our award-winning documentary ‘Voices from the Knitting Circle’  (2018) followed the voices of some of the extraordinary people who entrusted us with their life stories.

Voices from The Knitting Circle – Documentary