A chilling glimpse into the secret worlds and stolen years inside the asylums – ‘Persons fit to be removed’ cast out of sight on the fringes of society, were all these people truly Mad, Bad and Dangerous? Who is next?

Based on the testimonies of people who survived the asylums closed in the 1980s. Each of the actors was matched with people who lived or worked inside long stay hospitals. What reverberates is the extraordinary resilience and humanity of the courageous souls who have entrusted us with their stories.

“It was the mischief we got up to that saw us through.” Mary, survivor aged 80

The Knitting Circle was first developed at Soho Theatre with the following cast and creative team: 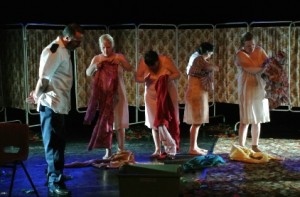 We were then offered support to further develop the work at Soho theatre in London. It sold out three weeks in advance of its’ opening at Soho before transferring to the Cochrane in Holborn and six national venues throughout the UK and Ireland.

Decibel Performing Arts showcase provided the only national showcase promoting the best artists across the creative industries working with diversity. We are very proud to have been present at both the 2009 and 2011 showcases, counted among the wide range of extraordinary talent presented.

“A Magdalene Laundry for the UK that isn’t even in the public consciousness”
Emma Tracey, BBC News, Ouch

“Very Clever script, brilliantly acted. I recognize all of the characters from our days in the old bins!”
Dr Rachel Perkins OBE (Story Contributor)

“An Excellent show. Beautiful, clever writing with subtle landing of the stories… harrowing at times. I am still thinking about it.”
Charlotte Jones (Independent Theatre Council)

It Should’ve Happened for Crazy Jane

Voices from The Knitting Circle – Documentary
Scroll to top