Whisper Me Happy Ever After 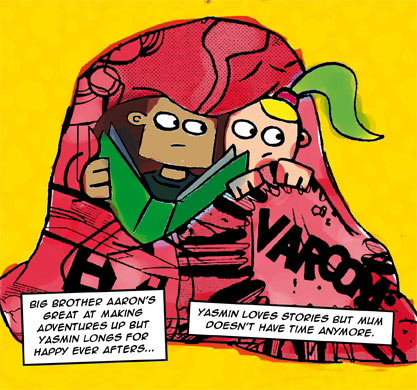 ‘Whisper Me Happy Ever After’ by Julie McNamara has been written from the testimonies of young pupils from 9 – 12 years surviving violence at home.

Yasmin loves stories but Mum doesn’t have time any more. Big brother Aaron loves adventures but Yasmin longs for a happy ever after…

This is a powerful play about domestic violence and its’ lasting impact on the lives and emotional well being of young people.

The idea for ‘Whisper Me Happy Ever After’ originated from work Face Front was doing in an Enfield Women’s refuge working with children who had witnessed or directly experienced domestic violence. The effect on children is often underplayed but as statistics from the Kids Company show:

“Before you came, I was about to burst. But you showed me a child like me, so I knew I could finally tell someone.”
Year 5 pupil, aged 10

“Your excellent production has again alerted us to the issues surrounding domestic violence and we will continue to keep this in mind when working with all children.”
Child Protection Officer, Wilbury School

“I loved the dream section…beautiful and magical. A very good way to show how the problems and worry can affect a child’s ability to rest and sleep and to perform at school. Great work!”
Karine Friez

For further information or to enquire about a booking please send us a message using our online enquiry form. Alternatively, drop us an email or give us a call on 020 8123 9945.