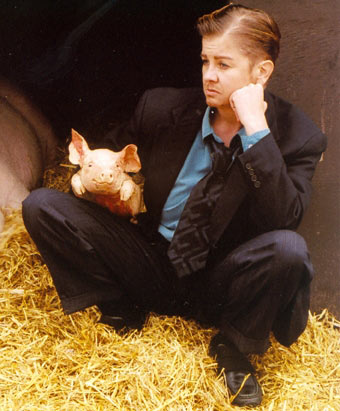 Pig is a female child raised as a boy. Pig’s warring Liverpool family are haunted by the rigid teachings of the Catholic church. Disappointed with their lot and dislocated from their roots, the family implodes. Pig lures us into the chaos and confusion of an adolescence set against the brutality of the Mental Health System. An extraordinary tale, told through raw humour, compassion and bare-faced cheek.

Written and performed by Julie McNamara
Directed by Jessica Higgs

Commissioned by Jackson’s Lane and Oval House Theatre, as the flagship of the Xposure Festival of Disability Arts in November 2002.

The production toured internationally until February 2008